From over six decades our passion for making your business dreams a reality has only become stronger. With a great enthusiasm, we are all set to compose a Classier, Professional yet Warming look for your Restaurant!

Smiling Carrots is in a constant mode of exploring ideas and innovations. Our team is ever ready to try out new experiments and implement the exceptional ones in our projects. With changing trends and rising technological advancements, we mould ourselves to serve the latest. Decades of experience has bestowed us the strength to face any challenges with ease. We have consulted a range of clients from different segments of Restaurant and Food Management business. For us, every project that we handle becomes our responsibility. We love to make dreams of our clients a magnificent reality!

Our entrepreneurial structure is based on three golden aspects 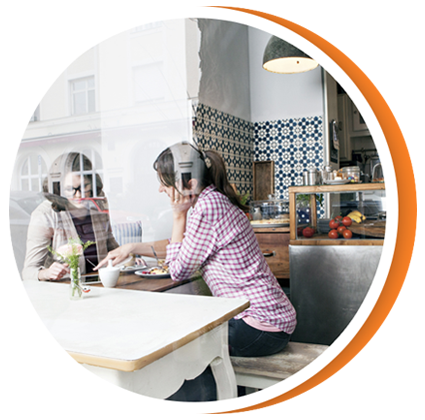 Set up - Right from selection of potential space to coating it with a lavish touch, we plan and execute everything for you.

Operate - With aesthetic value next comes smooth functioning of the systems inside and we are smart at it!

Transfer - We strive to make the process of business continuity much easier and accurate.

SOT defines our core concept & it is an inseparable part of our legacy! We aim to offer up to date and supreme quality services in the arena of Restaurant Management and Consultancy to our clients.

Concept and ideation are the key factors behind every restaurant business. With over 60 years of presence in this industry, we have successfully developed concepts for various reputed clients in the business. Yet, our spirit and energy to work with every new opportunity are still the same. We are glad to sketch a diverse range of concepts that too on an International level!

Want to establish a strong brand presence of your Food Chain across the globe? Then, Interior design is an inescapable part. We have been looking after this essential factor with extra care. Our team of experts combines various aspects of the restaurant i.e. the menu offerings, arrangements of the dining area, production, sales & distribution and modern management systems to give it a unique theme that becomes its core identity. We at Smiling Carrots are happy to give your restaurant an eye-catching and memorable identity.

The secret of a successful restaurant business lies in the dedication you put into setting up its kitchen. From arranging its basic layout to all the other materials and elements, we take care of everything! Smiling Carrots works to meet every requirement from this section and thus, is always prepared to serve customers what’s best. Each aspect has a great impact on food sales, distribution and customer perception. We place the kitchen using a cost effective strategy that benefits restaurant owner as well makes the services function efficiently.

We help you to balance this act of Menu Creation with grace. We ensure that the menu not only seeks customer’s attention but also consider the major aspects of desirability, loyalty, and profitability. We believe that the cuisines, pricing, and services should have some unique quality and we have created some of the best wow factors for our clients. Menu builds a perception about a restaurant in customer’s mind and Smiling Carrots sets it right!

Craft beers, unlike bottled beers which are produced in large quantities, are freshly brewed beers, brewed to a specific style and tradition of the region from which it originates.

We offer you a complete turnkey consultancy service which is not limited to, but includes licensing advise, Excise and Pollution control board documentation, project planning, restaurant design, drainage and ETP design, structural considerations, electrical power, equipment configuration and sourcing options, brewery installation and commissioning, trial brewing, brewer training, brewery management.We have years of experience in this business and have set up breweries in Bangalore, Pune, Mumbai, Gurgaon, and Kolkata.

With a microbrewery, you have the choice and ability of brewing any style of beer in the world including creating your own style of beer.

To make your hotel run systematically, there needs to have a resourceful strategy. We have expertise in implementing an effective strategy for sourcing of supplies and equipments. With a sound experience into this area, we have built a very healthy relationship with vendors and suppliers making the process easier and beneficial for our clients.

Restaurant survives but brand makes a long lasting impact on the minds of consumers. Branding in simplest words is about giving visual and emotional cues. Our creative experts help your restaurant to get an identity of its own. Inclusive of all the crucial elements of branding i.e. Name, Logo, Brand Communication, Menu Designing, Indoor and Outdoor Advertising, etc, we create an impressive brand strategy.

Our experience in this business has made us clever in terms of advertising and promoting brand in best possible way! We make it special, recognisable and memorable. It is an age of integrated marketing and a great opportunity to execute your brand marketing via availability of various powerful mediums. We draft an influential marketing communication through creative and brand synced Print Media Marketing, Digital Media Marketing (Website, Web Banners, Facebook, Instagram, Twitter, etc), Tie-ups with Online Food Delivery Portals, etc. In this smart age, the ways to communicate your brand has become much easier and smarter as well. Now you can tap customer on the internet just at a click away! This new technology has made us more excited and alert to implement new branding methods for our clients.

HR is the most significant department. Right from the staff selection process to staff training, it takes the decisions that have a direct relation with the business outcome. Thus, we always put a little extra effort to set the HR section right.

Be it any procedure of Government Registrations or be it licensing Fire Alarm System, we help you in each legal task.

Updated IT services! We believe in staying technologically advanced and with the parity of new world trends.